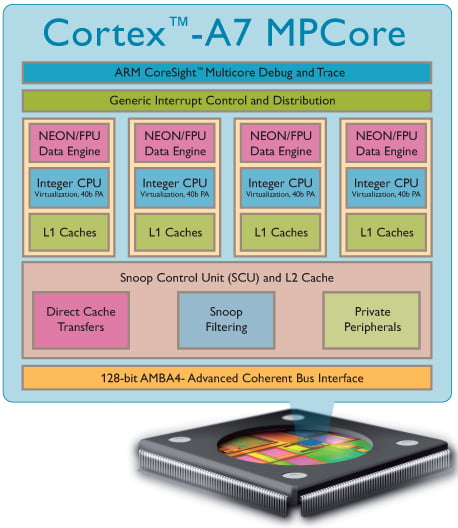 One of today’s technology most significant challenges is how to create a System on Chip (SoC) that meets the conflicting consumer demand for devices with both higher-performance AND extended battery life. Big.LITTLE processing, enabled by Cortex-A7, achieves this by pairing the best of the high-performance Cortex-A15 MPCore and ultra-efficient Cortex-A7 processors. Big.LITTLE processing allows devices to seamlessly select the right processor for the right task, based on performance requirements. Importantly, this dynamic selection is transparent to the application software or middleware running on the processors.

Mobile usage has changed significantly and today consumers are increasingly using their smartphone for the majority of their connected lives. This includes high-performance tasks, such as web browsing, navigation and gaming, and less demanding ‘always on, always connected’ background tasks, such as voice calls, social networking and email services. As a result, the mobile phone has become an indispensible compute device for many consumers. At the same time, new mobile form factors, such as tablets, are redefining computing platforms in response to consumer demand. This is creating new ways for consumers to interact with content and brings what was once only possible on a tethered device to the mobile world.

By developing big.LITTLE processing and the Cortex-A7 processor, ARM has addressed the challenge for technology that can deliver both high-performance, required for content creation and consumption, while also delivering extreme power efficiency for extended battery life. This is particularly pertinent as smartphones and tablets continue to evolve into the primary platforms that consumers use to interact with our increasingly connected world.

Cortex-A7 – extending ARM low-power leadership
The efficiency of the ARM architecture is the reason why ARM processors use less power and occupy a smaller footprint. The Cortex-A7 processor occupies less than 0.5mm2, using 28nm process technology, and provides compelling performance in both single and multicore configurations. Used as a stand-alone processor, the Cortex-A7 will deliver sub-$100 entry level smartphones in the 2013-2014 timeframe with an equivalent level of processing performance to today’s $500 high-end smartphones.

The ARM vision of the entry level smartphone market is to redefine usage in the developing world by helping connect the next billion people to Internet content and services over mobile devices.

The ‘LITTLE’, lowest-power processor – in this case, the Cortex-A7 – runs the Operating System (OS) and applications for basic always-on, always connected tasks, such as social media and audio playback. The OS and apps can then be seamlessly migrated to the higher-performance processor as demands increase for high end tasks, such as navigation and gaming. The time for this migration is in the order of 20 microseconds.

This flexible approach of choosing the right processor for the right job enables highly optimized processing which results in significant energy savings for common workloads.

System IP and tools ensures coherency and optimization for multicore solutions
The efficient and seamless switching of workloads between the two processors is supported by advanced ARM system IP, such as AMBA® 4 ACE Coherency Extensions. This ensures full cache, I/O and processor-to-processor coherency between the Cortex-A15 and Cortex-A7, and across the complete system. Software and applications can therefore continue to run unhindered, and unnoticed by the user, as the tasks are rebalanced to provide the optimum big.LITTLE user experience.